The physical laws governing the behaviour of the elements are particularly fascinating for the rigor and precision with which they create and sculpt the world surrounding us. N was born from the interest to explore, interpret and represent nature’s laws, in an attempt to recreate these processes and to trigger in the viewer the impression to be in front of a living organism.
The work has been presented for the first time in 2010 at NODE Festival and in 2016 it has been completely redesigned for Lumina Festival in Cascais, Portugal.

The system's output is an architectural projection, the environment where the interactions among the different elements take place. The input elements are the building’s architecture itself, the generated sound and the wind data (intensity and direction) acquired real-time.
The installation has been designed for evolving over time and for emphasizing different physical components of the net and of the particle system. 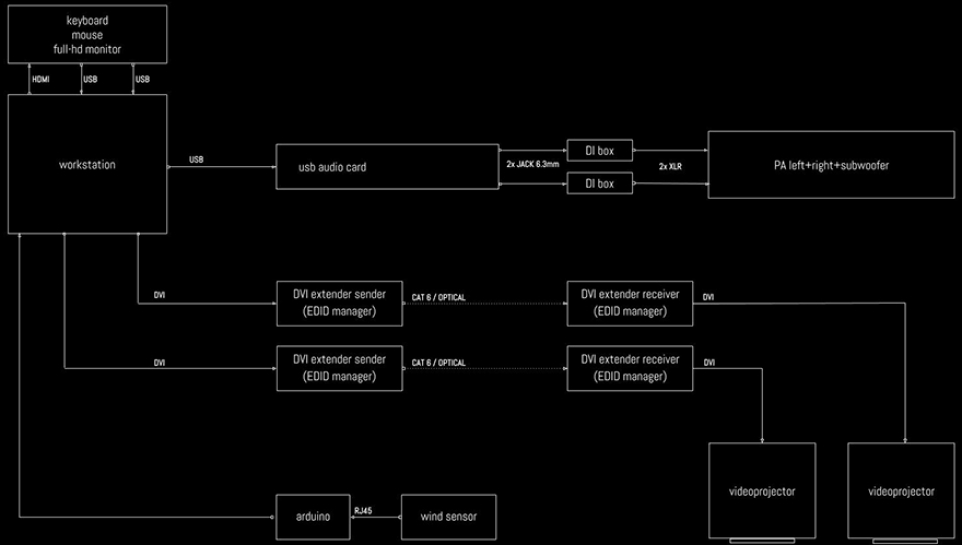 The software has been developed in openFrameworks and is composed of 3 main modules for the physical computation of the relevant elements (net’s behaviour, particle laws, fluid dynamics). The data are computed in OpenCL and rendered through shaders. Wind is measured by a sensor, and the acquired data is transmitted to the main software through Arduino.
Both the visual and the audio part are affected by the wind values, which are transmitted in OSC to the generative patch created in Max/MSP, responsible for modifying the soundscape real-time.