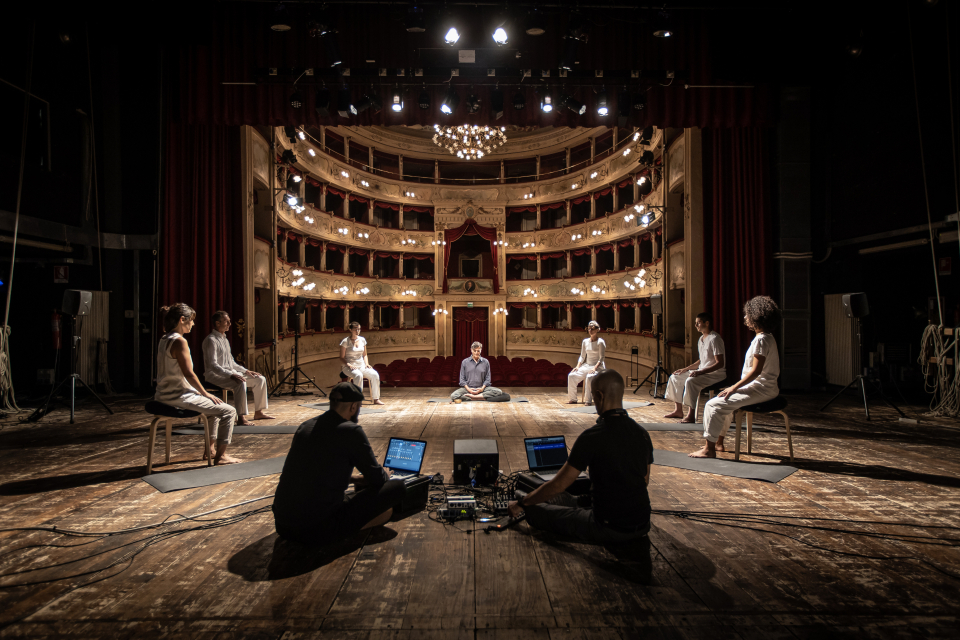 Sál | Rite is one of the three levels along which the project Sál is articulated, third chapter of the trilogy of live-media performances along with Dökk and Ljòs.

In this early prototype phase, Sál | Rite has taken the form of a performance that, following a parallel flow to the narration of the main show, offers the possibility to participate in a collective ritual in which meditation becomes the means to access states of consciousness at the edge of our perception.

In order to explore the mental states of the participants, we decided to leverage on EEG (electroencephalography) technologies, probing and making perceptible the incessant swarming of cerebral processes that normally remain invisible. 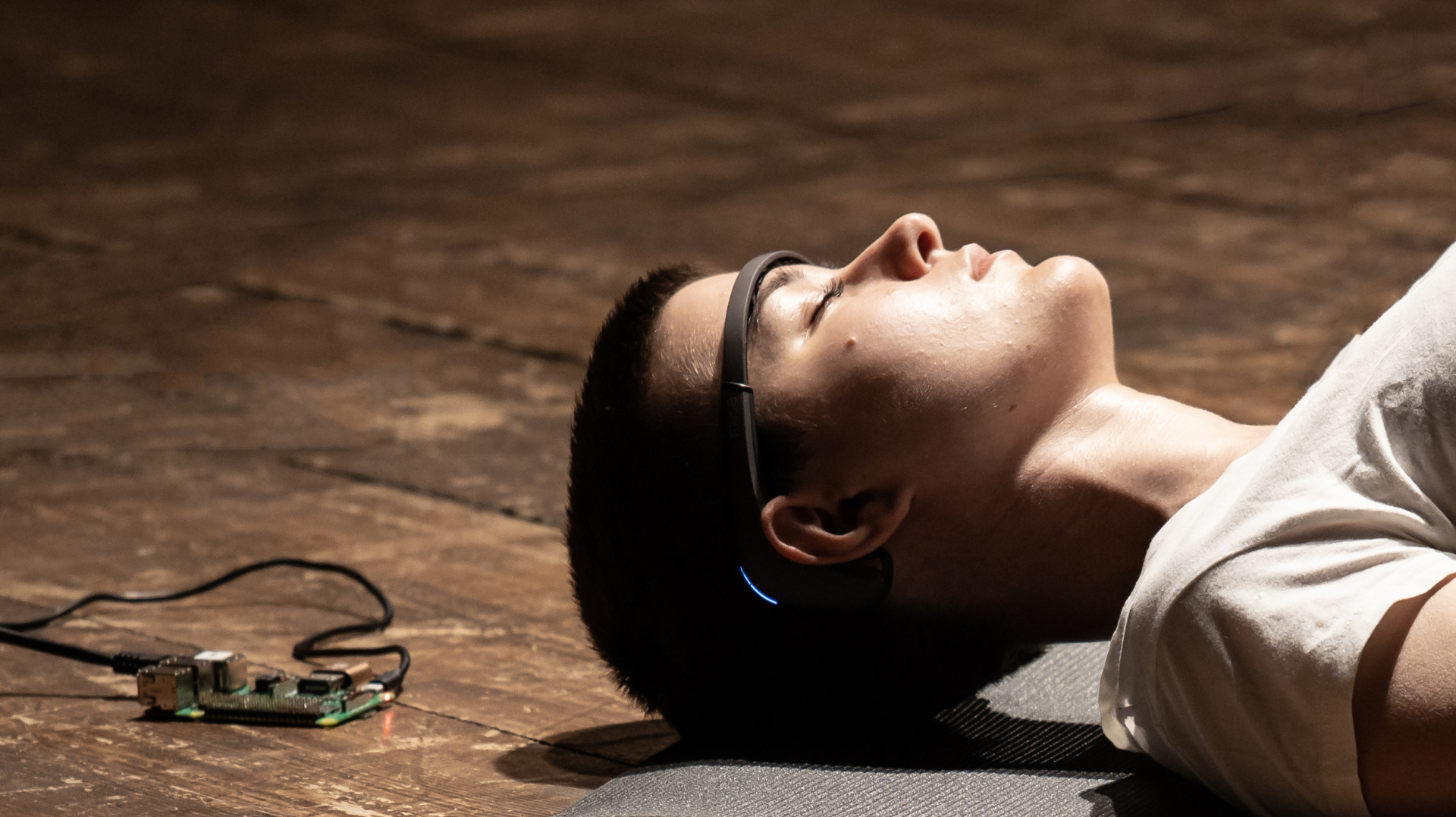 Using the Muse 2 headset, we have access to a series of raw data: the values of brain waves measured by four sensors and heartbeat patterns measured by the PPG method, which allow us to measure both the frequency and the variance of the heart activity.

The four sensors, located in different points of the head, measure the value of the local electric potential expressed in microvolts, compared to a reference electrode placed in the center of the forehead. These signals provide some information about the general trend of brain activity and its intensity, but give few clues about the quality of mental states in action.

For this reason it is necessary to look at brainwaves' frequencies. After reducing noise and eliminating signal artifacts, we proceed to an FFT analysis by measuring the intensity of the various frequencies. Scientific literature has, over the years, established a correlation between the relative intensity of frequencies within specific bands and some mental states. In particular, Alpha waves (between 8 and 13 Hz) are associated with mental states of relaxation and calm, Theta waves (4-7 Hz) with states of deep relaxation and sleep, while Beta waves (13-32 Hz) and Delta (>32 Hz) are related to states of vigilance and concentration.

By analyzing the variations of these frequencies over time, in particular the relative intensity of Alpha waves compared to Beta and Delta waves, it was possible to characterize moments of greater or lesser depth during meditation, allowing meditators wearing the headset to share their inner journey with other participants.

Aware of how mental states are complex phenomena that are not limited to brain activity, and that cannot be reduced to a few parameters, our intention is to use physiological data as a lens, albeit imperfect, to expand our vision and make perceptible with the senses the flow of transformation that continuously crosses our mind. 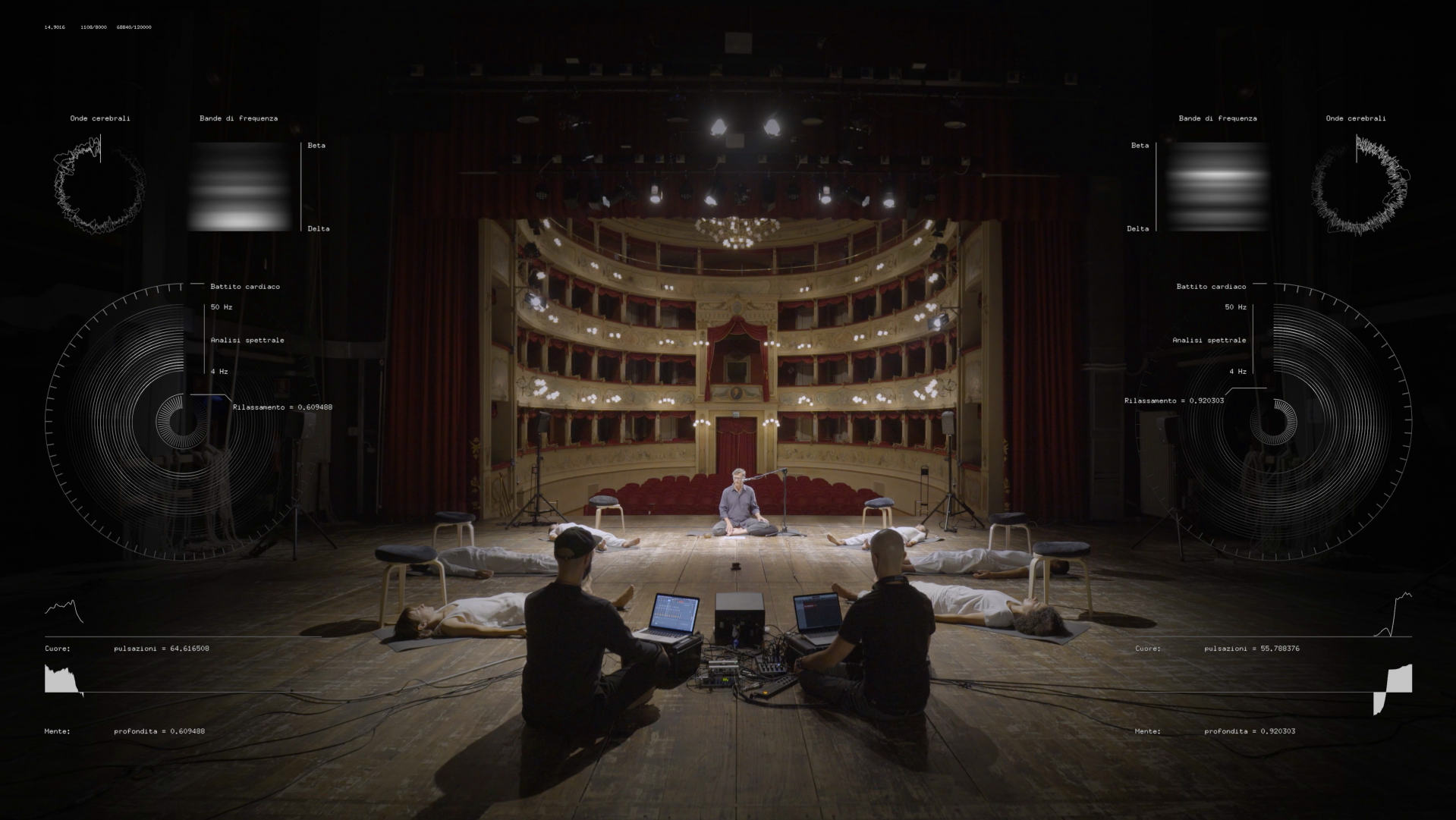 Our perceptions are dominated by sight, to promote concentration it is necessary to rely on hearing, on sound. So it is the sound that guides meditators during this experience, the voice of the one who leads the meditation to determine its path and rhythm. 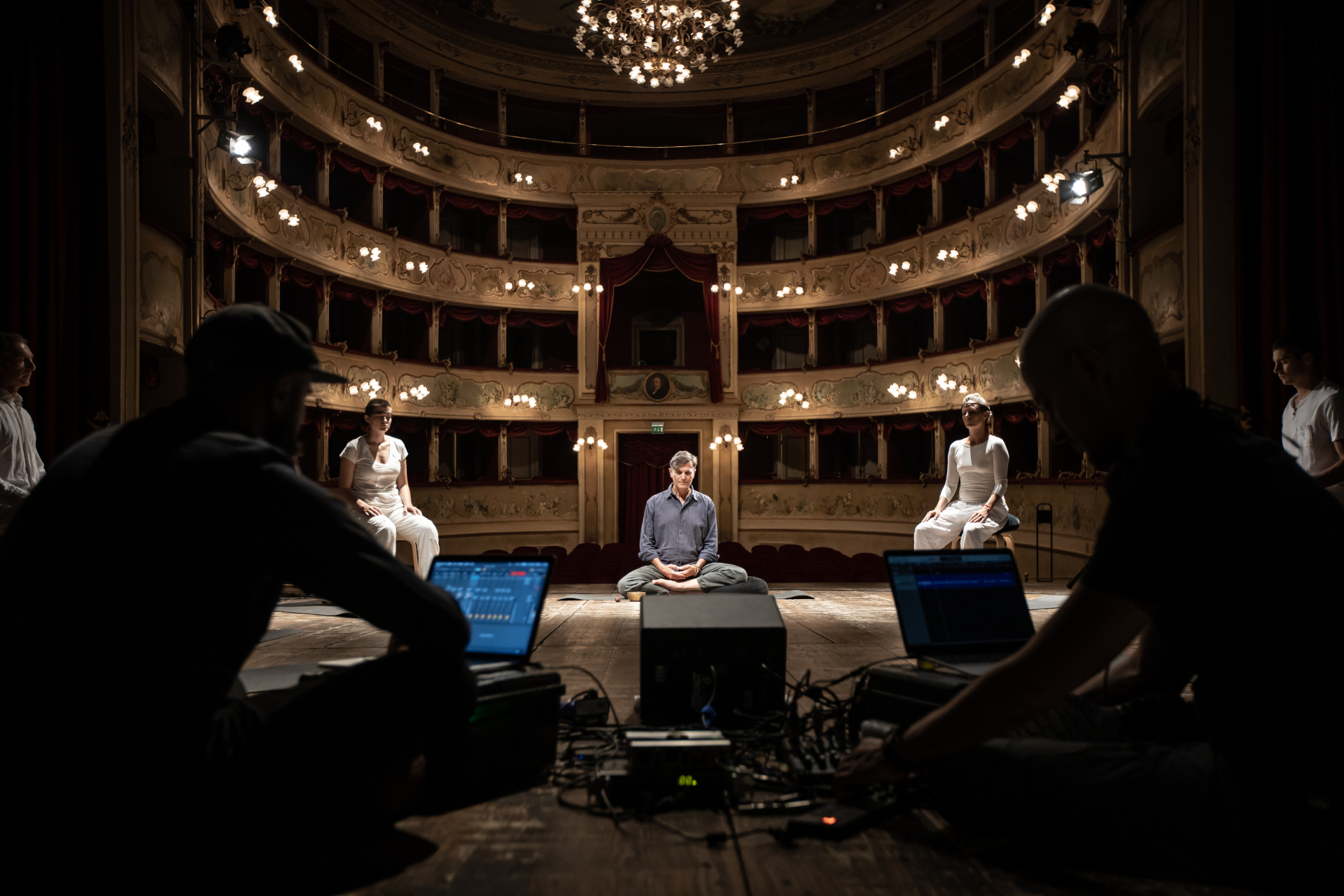 To strengthen the experience of being in a real sonic environment in which meditators can immerse themselves, we leveraged on Ambisonic technology using a dedicated library developed by IRCAM.
By placing sound objects in a virtual space, we were able to reproduce the feeling of being inside this space, thanks to a variable number of speakers placed around the listener.

In the first part of the performance, the idea of material and spiritual dissolution is dominant. Sampled sounds, although processed and transformed, maintain a degree of physicality and a connection with the materials from which they were generated.

In the second part, these samples are succeeded by pure vibrations. Starting from a fundamental frequency, a number of harmonics are generated, integer multiples of the fundamental frequency. These frequencies, which are inherent to their natural way of vibrating, move in the virtual space slowly changing position and intensity, creating a rarefied but ever-changing environment.