The installation is an attempt at the representation of gravity, a mental construct used in the clepsydra to measure time, yet the true identity of which leaves open fascinating horizons in the field of recent discoveries relative to gravitational waves. In the interpretation of this concept, the space-time continuum is obtained with the help of sound, which constitutes the fourth dimension, as well as the source of the modifications represented. Over the duration of the installation, four different phenomena concerning just as many space-time events are visualised, inside two parallel universes. The key feature of the installation is the close connection between audio and video, the correlation of which is achieved through a real-time analysis of samples from the right and left channels which go on to influence and modify their corresponding universes. The visitor thus finds himself immersed in a non-place, crossed conceptually by sounds and images shifting from one universe to the another.
The Clepsydra display foresees two video projections, twenty metres long and five metres high. The immersive quality of the two large screens, one in front of the other, may be experienced by the visitor either through the corridor formed by the two screens or by choosing to view the installation from the outside. The installation was designed to be integrated within the Ex Scalo Farini in Milan, featuring a matrix of columns that characterise the architecture of the space. 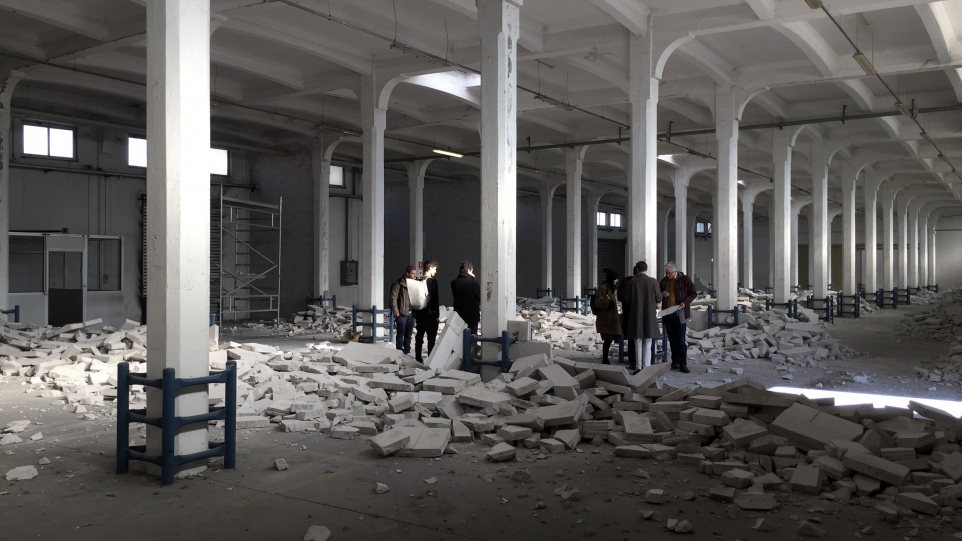 The code of the visual part was developed in Openframeworks with the use of OpenCL for the updating of visual elements. The audio part is generated with a Max/MSP patch developed especially for the installation. A number of the samples were created by converting raw data from generic files into sound, symbolically constituted by documents concerning the study of gravitational waves, resources for the interpretation of the data of interferometers, images of phenomena from the universe and data gathered from interstellar measurements. Another part of the sound is instead created by a generative patch of A.M. (amplitude modulation) and R.M. (ring modulation) synthesis, also produced using Max/MSP, in which frequency, wave form, envelope and breadth of the two signals (one steady and one modulating) alter randomly.