Luna Somnium is a dreamlike site-specific installation and audiovisual experience conceived for the Gazometro in Rome. The work features a 18-meter, 360° projected sphere suspended inside the metal structure of the Gazometro and designed to be visible from different locations around the city.

The title of the work draws inspiration from what is considered the first work of science fiction ever written: the "Somnium" (the dream), a short story written by John Kepler in 1600 where the reader follows the protagonist’s journey when he slips into a dream and travels to the moon. There, he meets its inhabitants and observes a different sky, one that defies common sense: one of the subtle intentions of the story was, in fact, convincing the supporters of the geocentric theory of the opposite, namely the Copernican heliocentric system. The moon thus becomes the place from which it is possible to observe the Earth, or reality, from a novel point of view that challenges beliefs and certainties, stimulating a transition to a new way of perceiving and experiencing the world.

Just like in Kepler’s tale, the exploration of reality from diverse viewpoints is at the core of the installation, which urges visitors to think about how a slight shift can affect their perception of reality. Given the scale of the work, Luna Somnium encourages people to view the installation from multiple perspectives - both inside and outside the gasometer, or from different areas of the city - while also initiating an individual, emotional exchange with the environment where the experience takes place. Luna Somnium is a call to freely experience reality and underlines the interdependence between different but equally legitimate interpretations of the world. 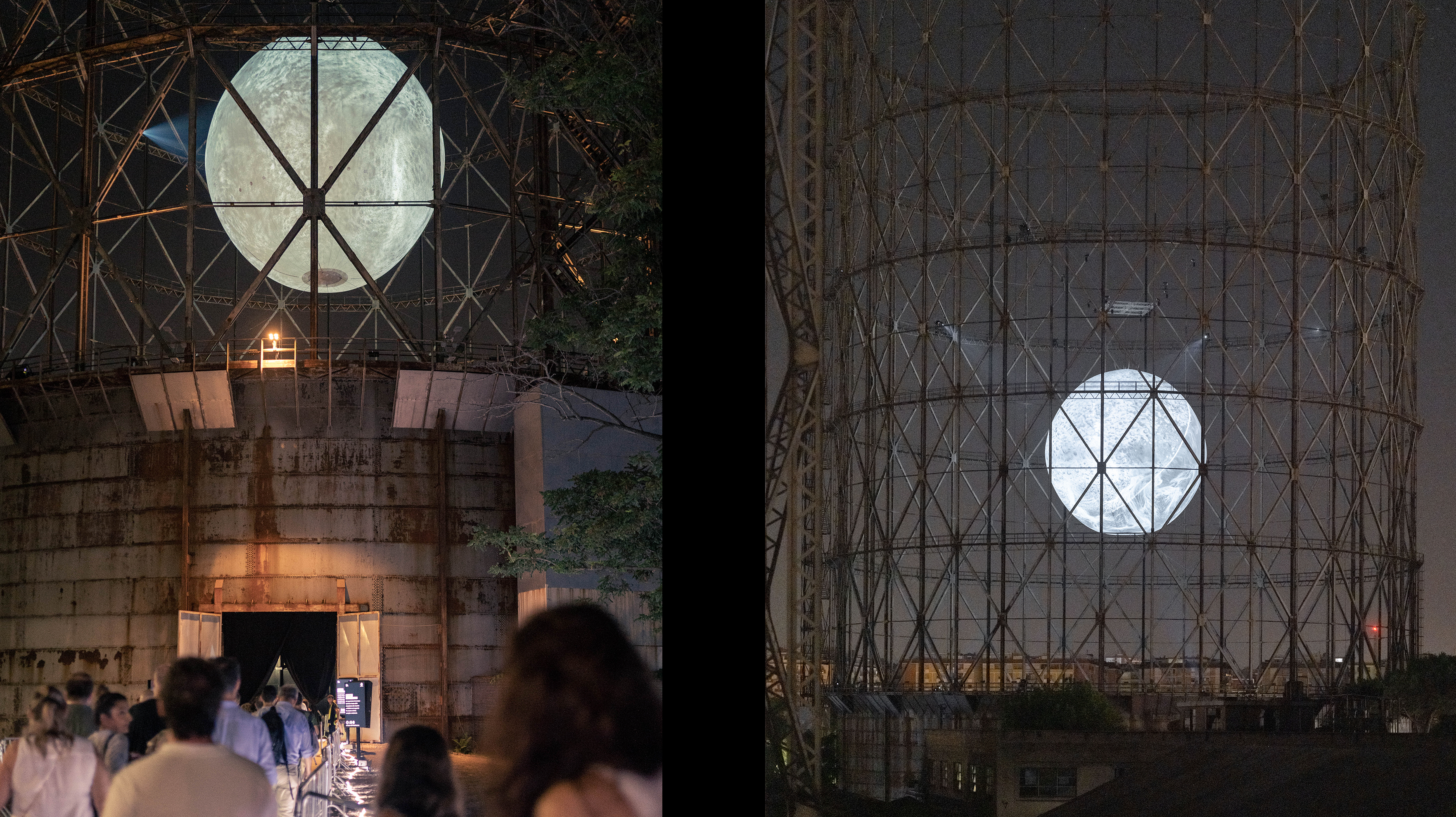 When we started delineating the concept of the project, we developed several proposals with different characteristics. After careful analysis, we decided to focus on the most audacious solution, which also particularly struck us for its evocative power: an illuminated inflatable sphere in the center of the gasometer. Initially imagining a static abstract reference to the moon, the first iteration of the project included an illuminated structure inflated from the outside and did not comprise any projections. 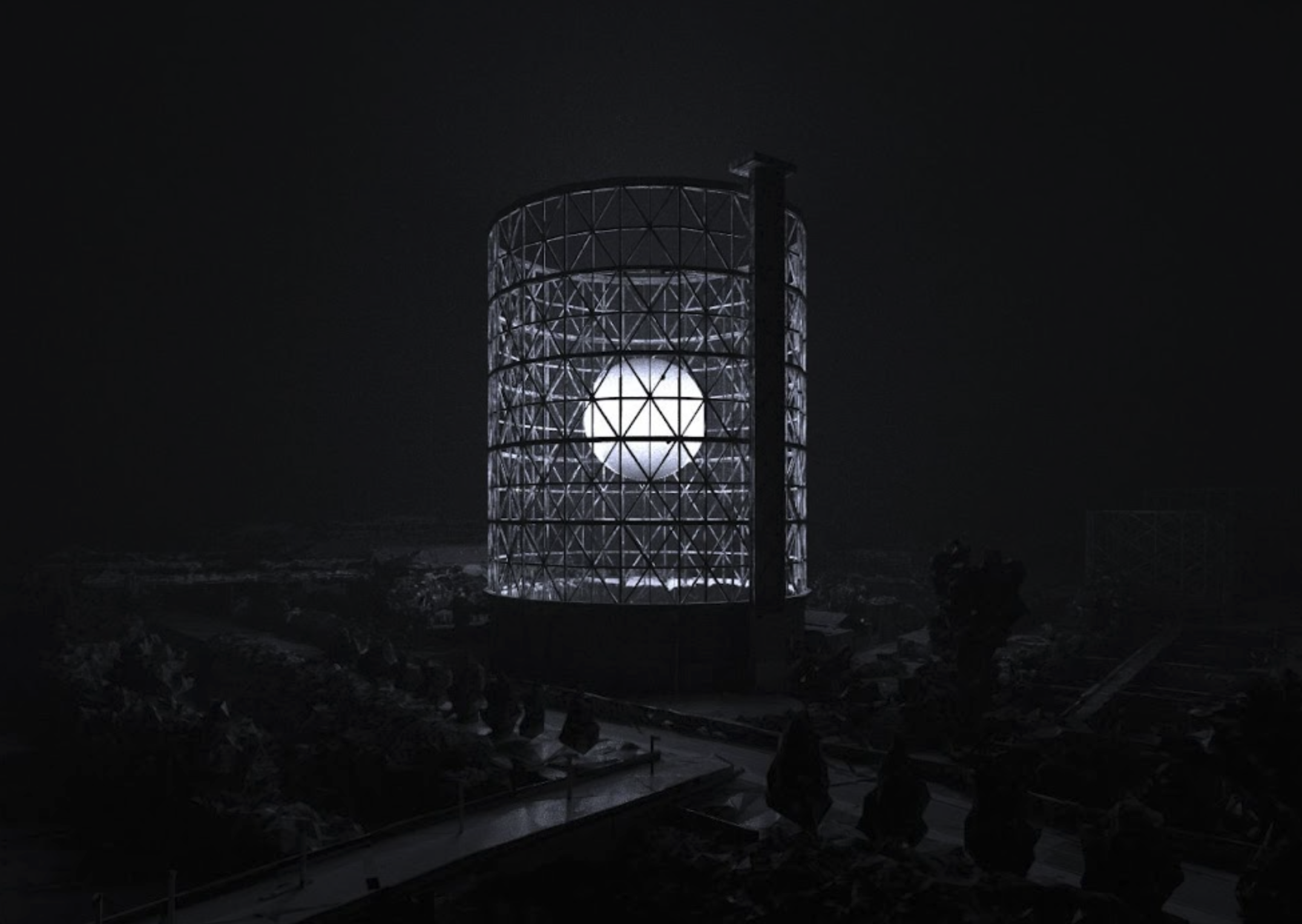 In the following stages of concept development, we gradually outlined the different elements that would shape the final experience.

Ultimately, the installation of Luna Somnium has been composed of a projection system with 12 projectors (1920x1200px) synchronized with strobes, beam lights and blinders casting the animations onto the simulated moon, together with a composite spatial sound system. The sphere hung in the gasometer has a diameter of 18m and has been made with 38 nylon segments measuring 1,5m x 25m, for a total surface of 925m and a weight of 200kg. On the north and south poles, the sphere contains two iron plates connected to four steel cables which work as lifting ropes. Moreover, on the south poles, the cables also have the role of avoiding any movements of the sphere because of wind or other atmospheric agents. In order for the sphere to maintain its rounded shape, 22 cables have been connected from the upper plate to the lower, internal sides of the sphere, so that its weight is equally distributed in the 4 supporting cables. Lastly, the upper plate also supports an electric fan that takes air from the outside and uses it to keep the sphere inflated. 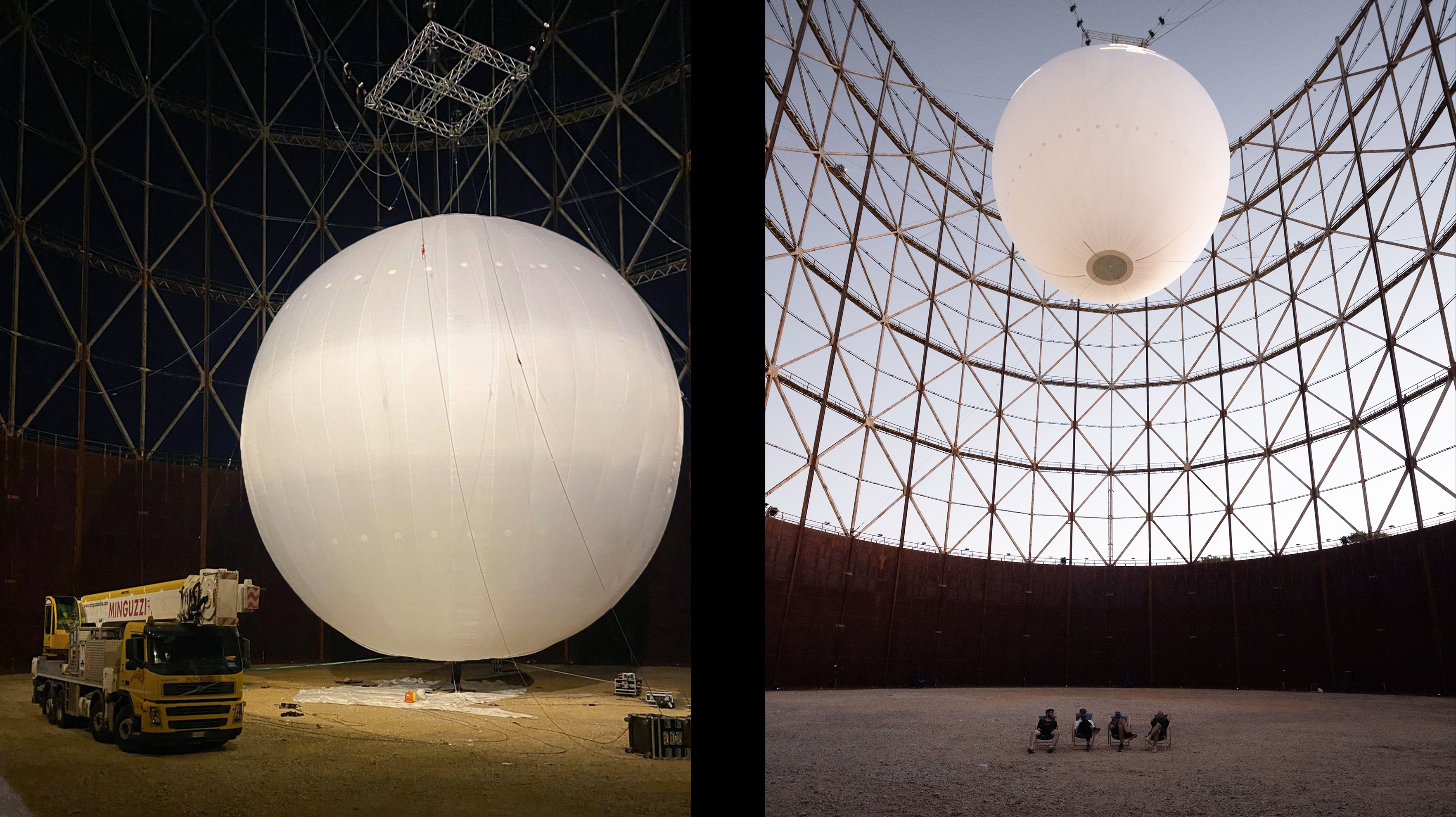 While the lunar phases - New Moon, Crescent, Full Moon, Waning Moon - inspired the animations, we also wanted to find different aesthetic metaphors both reminiscent and divergent of lunar features, so as to pursue various emotional journeys. For visual productions, we mainly used openFrameworks, while employing Ableton for the sound design and light controls.

For the first part of the experience, we defined a pipeline to create and record a simulation inside openFrameworks and later used the generated frames to create a realistic rendering of surfaces inside Houdini. In particular, we took advantage of the sound reactive elements encoded in the generated frame in openFrameworks and coupled that with the ability to create more realistic rocky structures and materials in Houdini and Redshift. 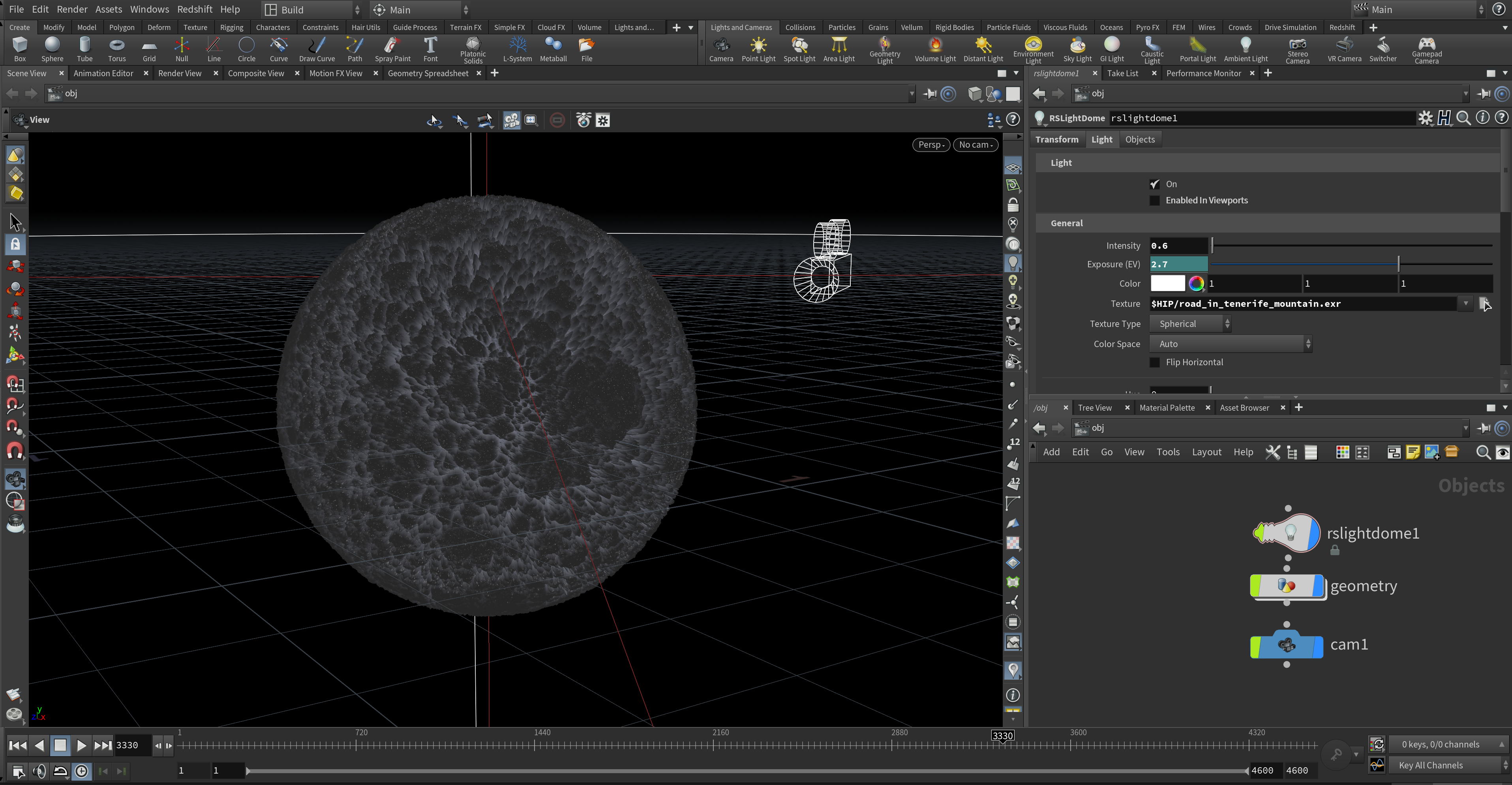 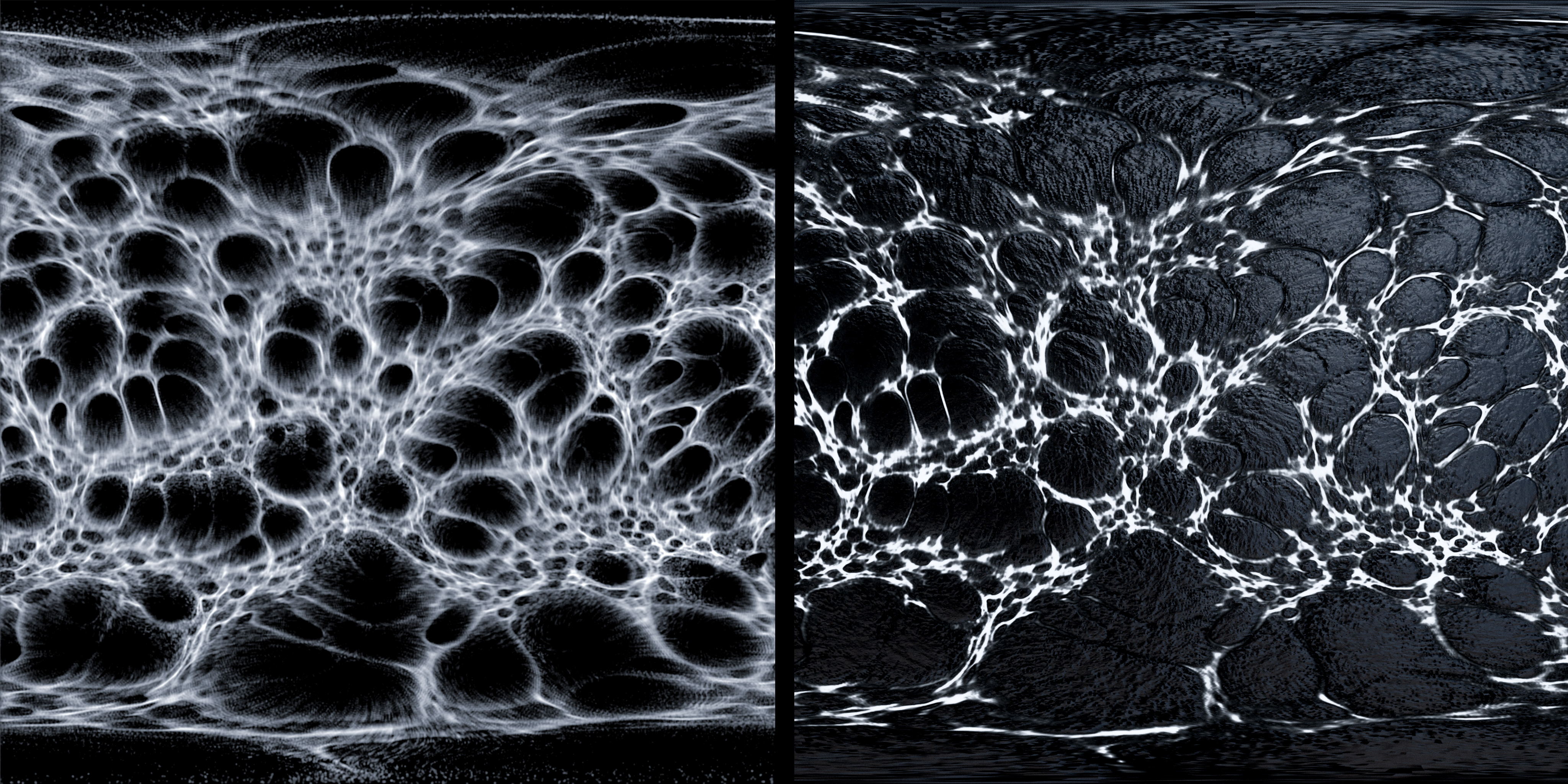 At the same time we mixed different shader techniques to simulate forces resembling natural phenomena, such as crack formations. 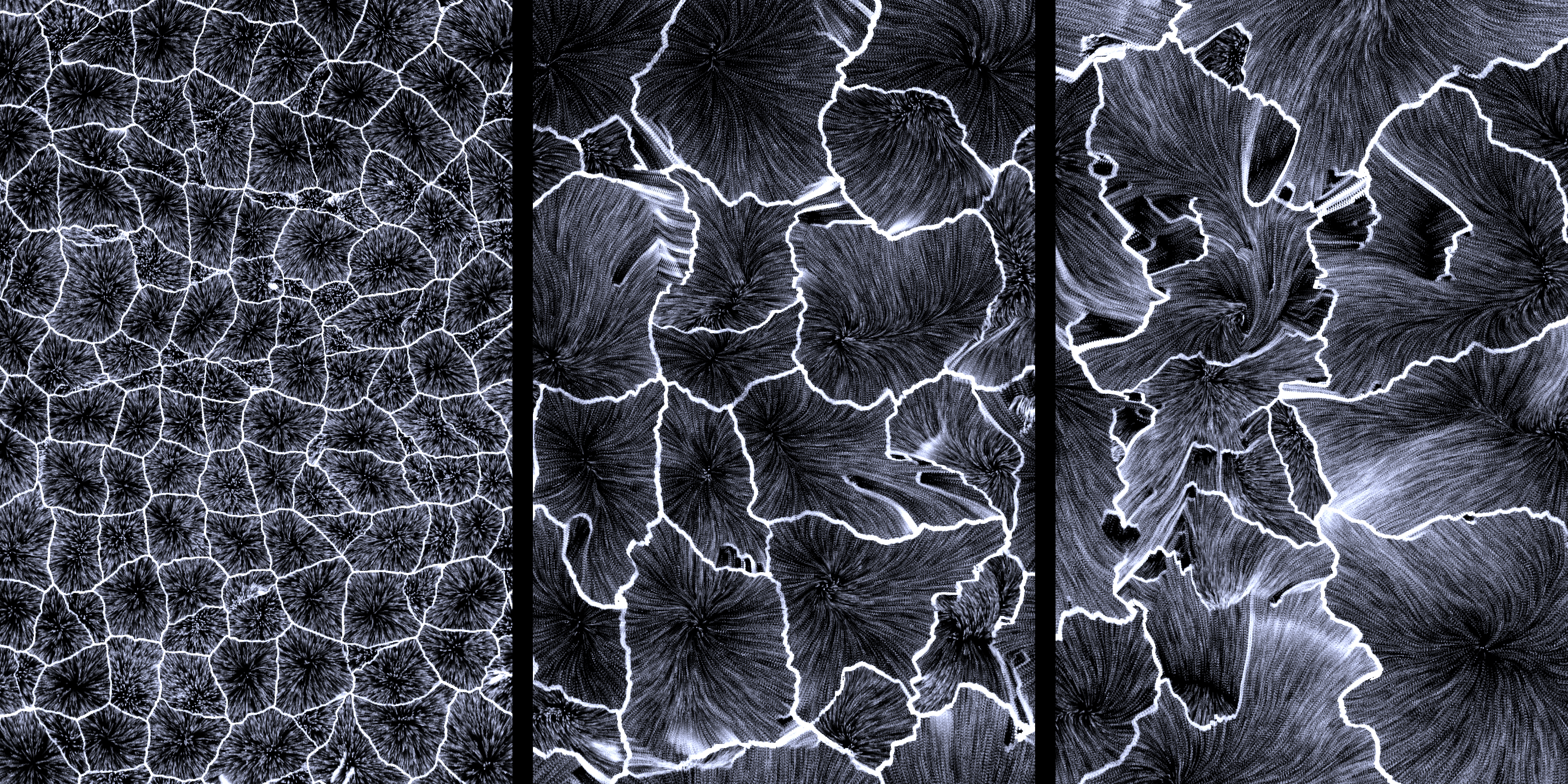 It is in the central part of the experience that the first transformation, very much like a change of state, occurs: the initial solid and rigid structures gradually lose shape and give way to smooth structures resembling liquid and organic forms.

For this section, we mainly employed noise based functions to influence the behavior of the particles by mixing different steering forces that would match both the emotional state of the experience and the audio intensity.

Subsequently, those same fluid structures further lose cohesion: the forces that hold them become frail and weak and start delineating a new landscape, underlining the point of greatest energetic thrust.

One important visual element we introduced to emphasize the stylistic transition is a scanning plane that defines the boundaries of the simulation. It becomes very much visible in two key moments, where the phase transitions become evident. 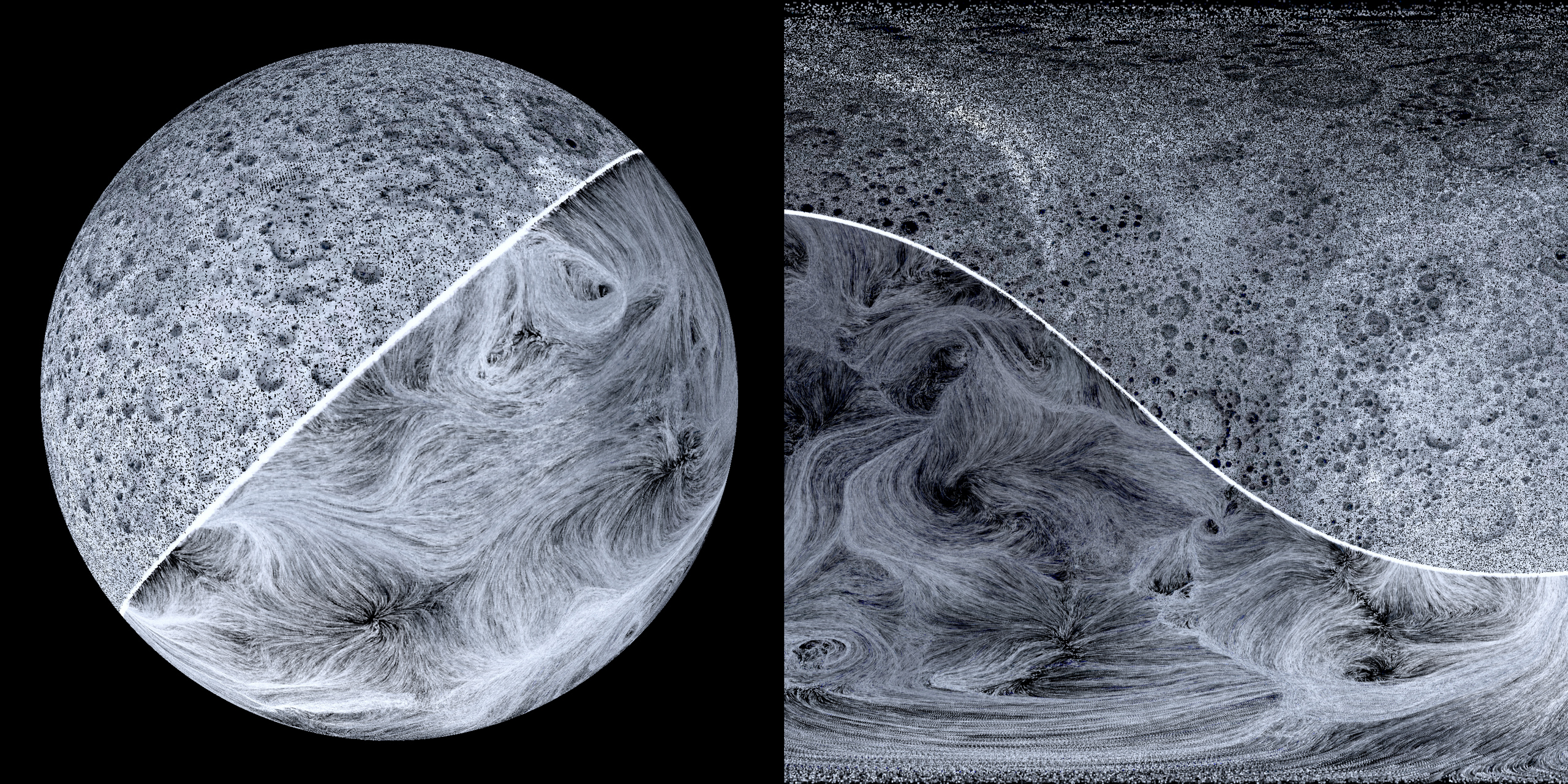 Another engaging element we employed was the introduction of attractors and repellers with different characteristics. These driving forces have proven to be particularly flexible in terms of tradeoff between efficiency and the number of variations included in the simulation. 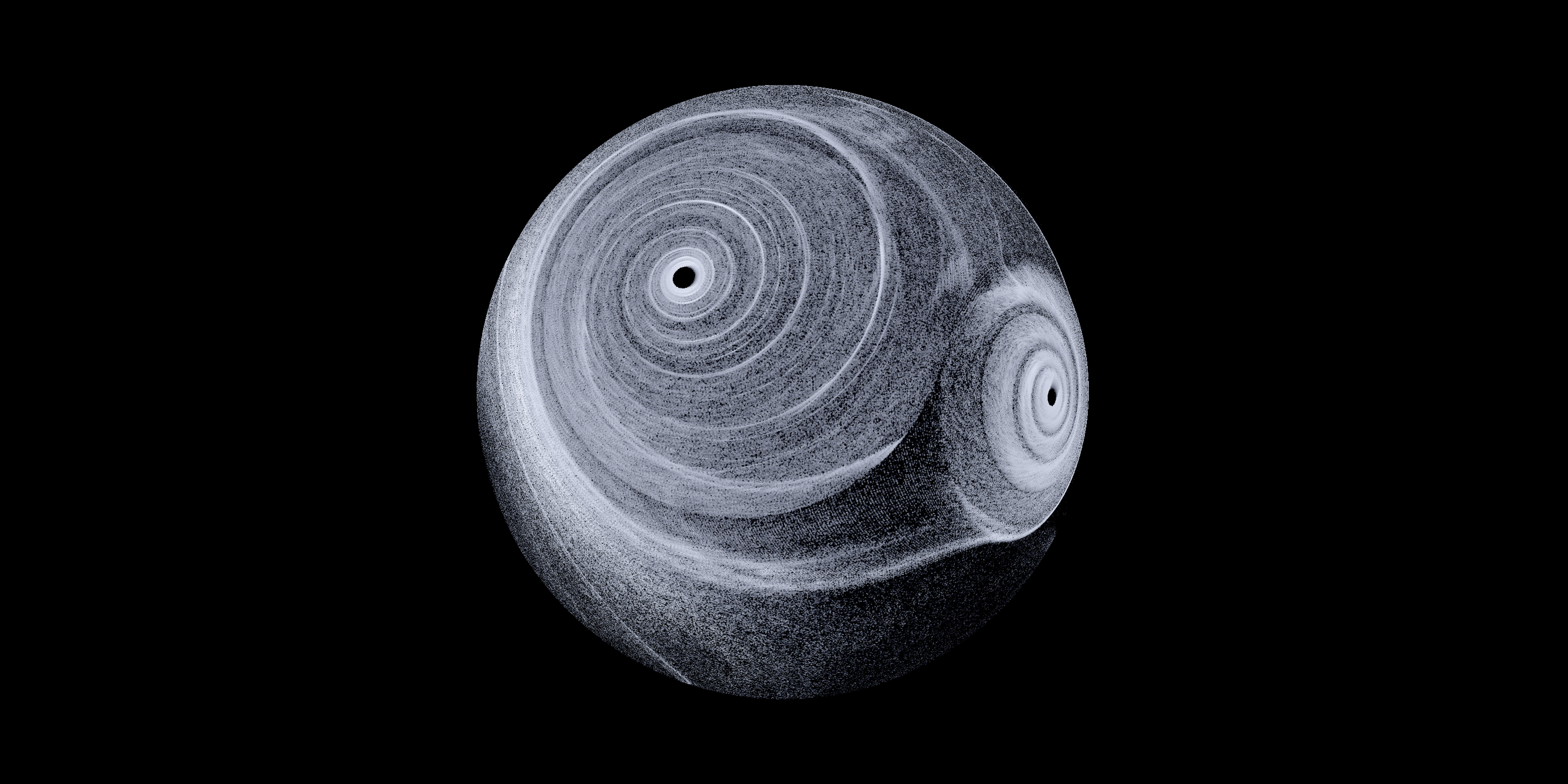 As we developed Luna Somnium, we have been faced with the challenge to translate our simulation in a 3D cartesian coordinate system: we had the necessity to project the particles onto a spherical surface in order to draw the final texture as an equirectangular map (then used for the actual projection on the video server).

Alternative solutions for the simulation space were tested during the development phase of the project, either a spherical coordinate system or a 2D particle simulation with latitude distortion. 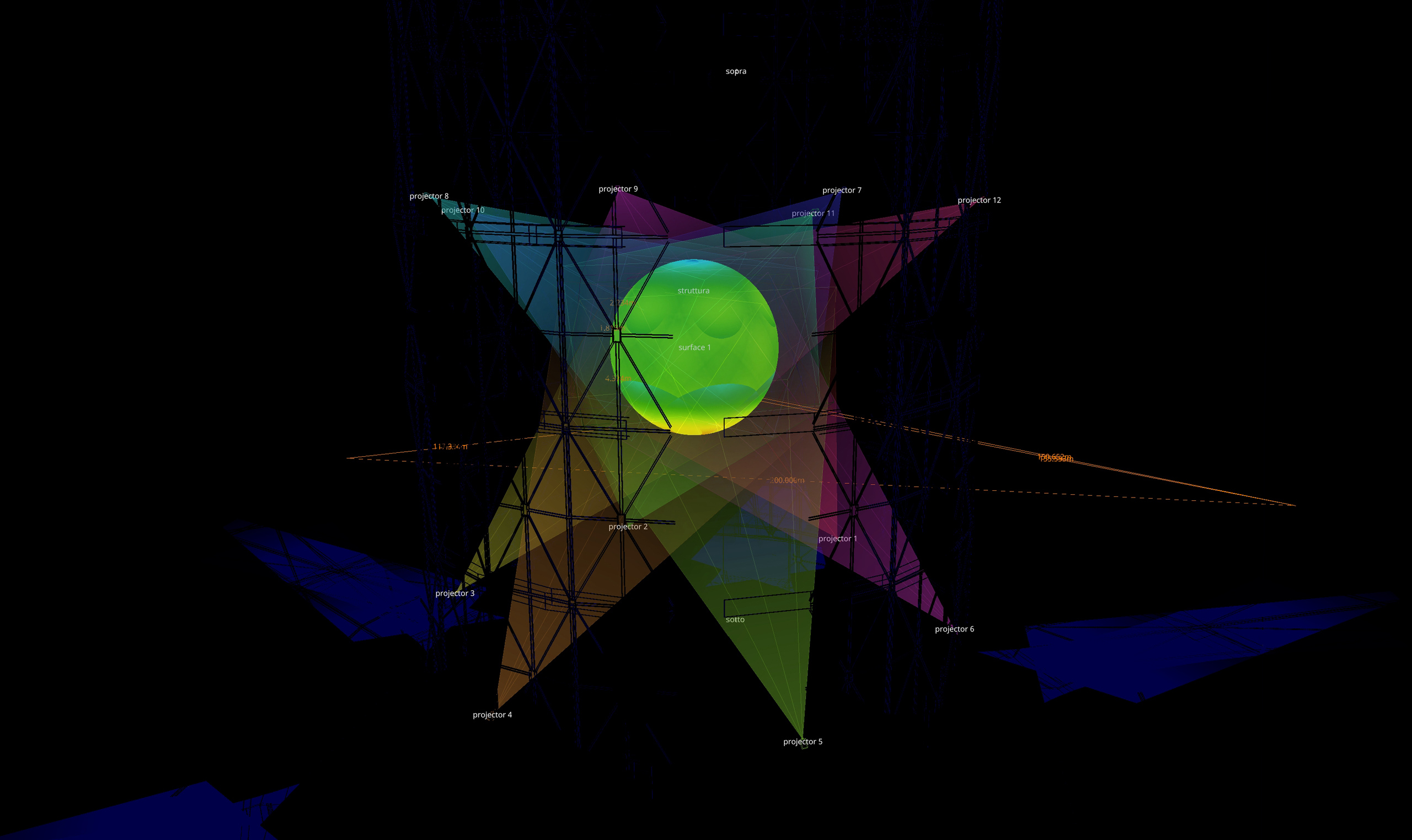 The musical composition created for Luna Somnium draws inspiration from the lunar phases and how the Moon shows transformations of its appearance to the Earth.

The creative process saw its beginning with the collection of keywords and the creation of a Formal Drawing. Through this drawing - a visual representation of the musical thought - the entire macro form of the paper and all its micro sections were designed, thus defining a narrative, dynamic emotional development; a reference point for the visual part as well. The formal design permits to observe from above one's thought and its developments: it works as a guide, a confined space, in which to move freely and experiment.

The research and aesthetic experimentation of timbre - a quality that allows us to distinguish sounds - focused on the recording of objects, acoustic and synthetic instruments and included: aluminum tubes, rubber balls, bass, double bass, percussion, paper. Their use was by means of some extended techniques - an unusual way of playing to recreate sounds - while different recording techniques, ORTF, Spaced Pair were used for recording. The purpose of this research was the need to include within the piece timbral and emotional contrasts (dark > light, empty > full, loud > delicate, rough > smooth, inharmonic > harmonic), capable of telling the variations of the lunar cycle.

The edited and cataloged recordings were then rearranged and assembled in the creative process of composing, using some writing techniques and audio manipulation through some custom patches of Max MSP. 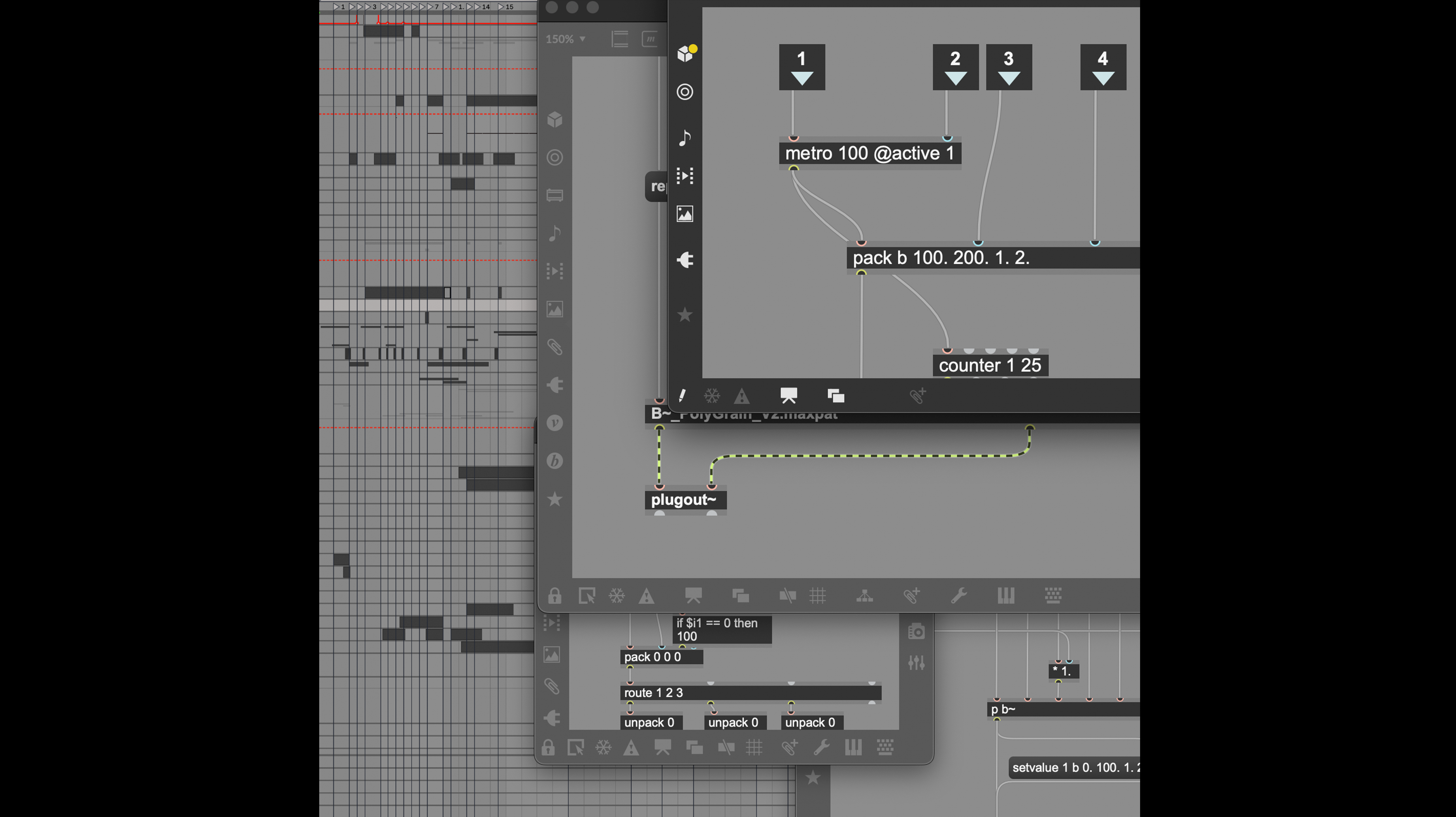 For example, the first few minutes of the piece are developed as follows: the introductory part, relaxed, rarefied, finds a canon - a contrapuntal technique that combines a melody with its imitations - at the fourth for two voices, lacking a climax and a conclusive development.

The sense of bewilderment in this part - given by the non-achievement of its end - contrasts with the new scenery, charged with tension, more defined and cadential, dark, where organic and chaotic events are articulated, thickened, and then emptied and gradually faded into the bright and relaxed central part. In this second part, details are emphasised, letting artefacts and noises emerge from the recordings by using saturations and compressions, unconventionally pushed to the extreme.

Spatialisation - a compositional parameter of the positions of sounds in space - is an integral part of the piece and is used as a creative element in developing tensions. The mixing of all the material was done for an octophonic multichannel system (8 channels).

Luna Somnium is a site-specific installation by fuse* produced for Videocittà 2022 by Eni.