Trust is a body of works that explores the multiple meanings and implications of the concept of trust. fuse* breaks down trust as it relates to three major societal institutions: finance, social media, and news sources. The exhibit analyzes historical events’ impact on society’s level of trust up to the present moment and considers how this relationship might evolve in the future.
Trust was commissioned by Artechouse and premiered in New York City on January 31st 2022.

Trust has been created to give the audience an immersive experience to contemplate how the presence or absence of trust can shift the perception of our individual and shared realities. Interpersonal trust allows an individual to build a sense of collective trust. Likewise, a loss of one’s personal confidence in the system can lead to a collective loss of mutual trust. Trust is an expansion on fuse*’s continued research in merging technology and the human experience to elicit empathy.
The exhibition unfolds in four different installations: 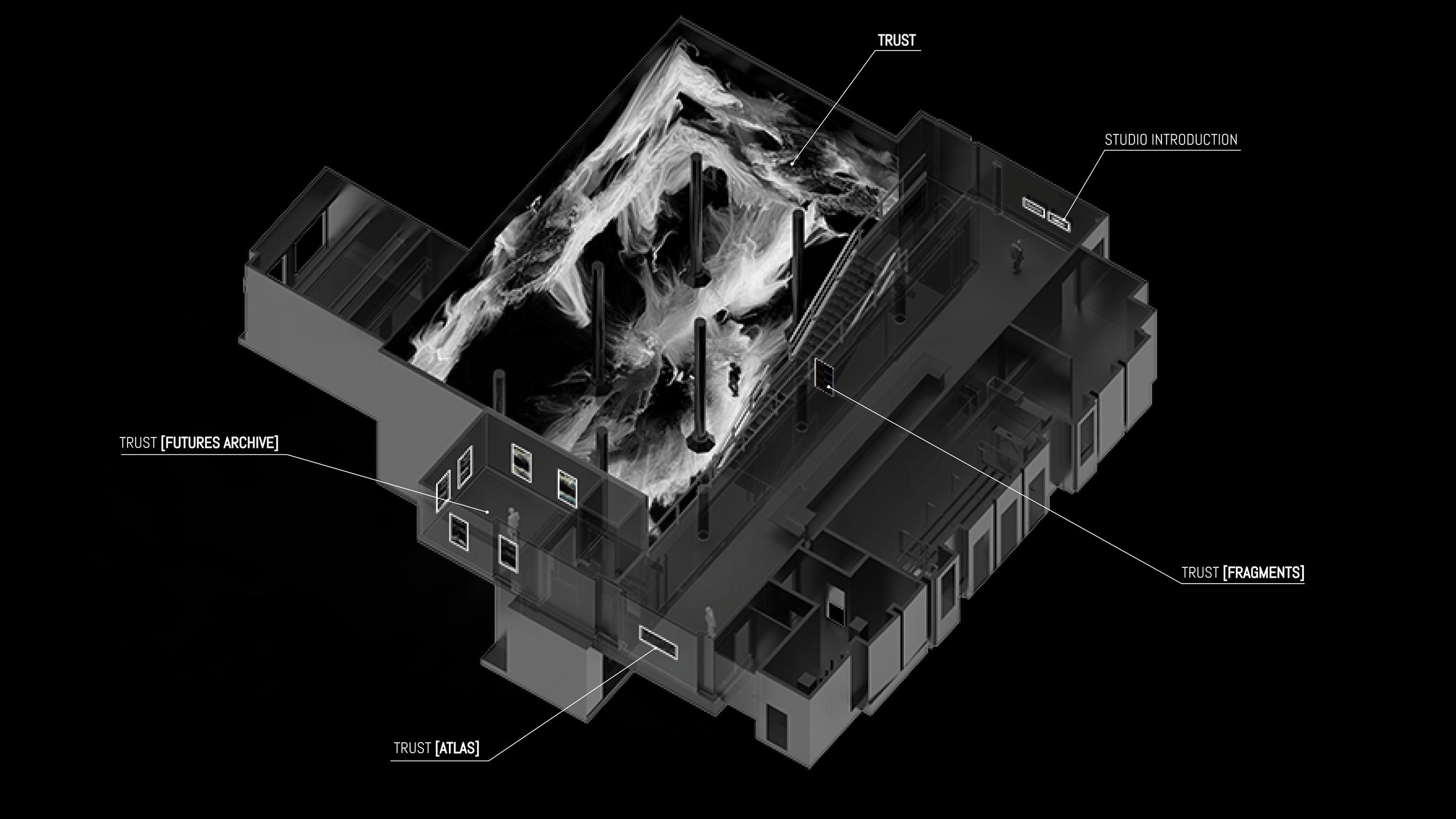 The main installation in the immersion gallery focuses on the ability of trust as a complex force to modify our perception of reality. The experience is composed of three chapters (past, present and future) and is characterized by a succession of audiovisual atmospheres that evolve following the trend of trust over time.
This trend has been reconstructed by interweaving financial data and the value of the Index of Consumer Sentiment (ICS) provided by the University of Michigan.
The first chapter, the past, is composed by two visual layers, a comment on the capacity of the media’s ability to affect our view of reality. The first layer is created through the reprocessing of point clouds that range from macroscopic visions, such as urban and rural environments, to the individual perspective, where human gestures represent the fundamental role of relationships in building individual trust.

These representations are created with different techniques. Internal reproduction of cities are mostly created with photogrammetric processes as we started investigating in our previous project Treu. Earlier tests were carried out trying to extrapolate 3-dimensional information from historical images through deep-learning techniques performing monocular depth estimation. Moreover aerial depictions of large portions of lands are created with the help of material provided by the United States Geological Survey (abbreviated with USGS). This content has been collected and then manipulated and re-processed inside openFrameworks to generate the final visualization.

The second layer is composed of artificially created newspaper text – cataloged by historical period – is the artistic result of an algorithm trained to recognize newspaper articles containing the word “trust” dating between 1922 and 2021. We queried news.google.com/newspapers dataset with the keyword “trust” and filtered the results with only free resources. This way we obtained a dataset of newspaper pages where there is at least one article that speaks about “trust”. We splitted this dataset in different periods according to the concept and our storytelling and we used these articles to train a neural network able to generate articles based on the specific period. 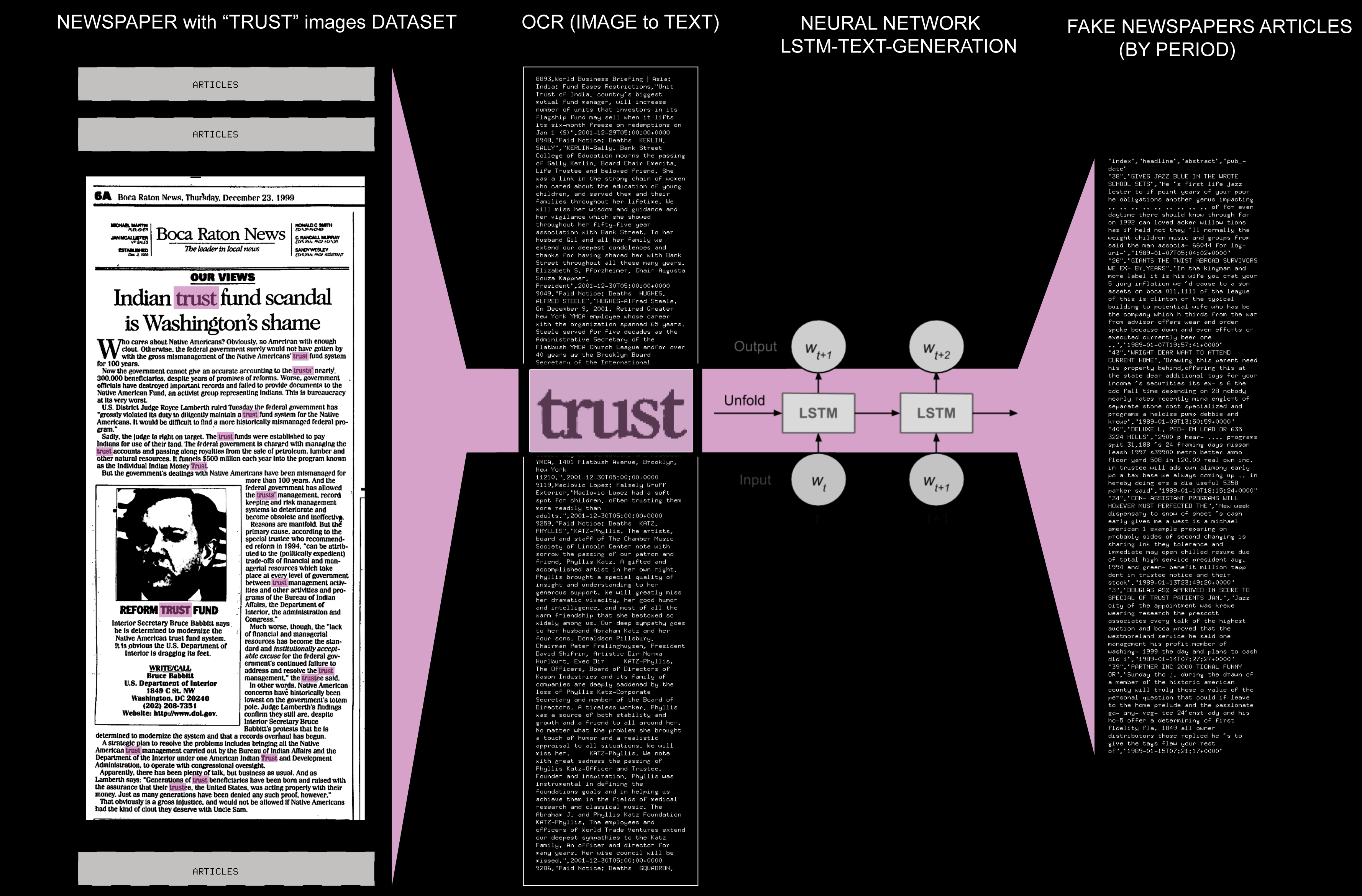 The perception of how the news’ magnitude can influence reality is symbolized by the fluctuations of the point clouds.The present is designed to be visually composed of a series of moments impressed on a film. The negative images scroll together with 750,000 tweets selected from 500,000,000 messages archived during the pandemic, starting in March 2020. All the selected tweets contain the word "trust" and have been categorized with a positive and negative label through a sentiment analysis algorithm.

By combining the monthly trust data taken from the ICS index and the real time value of the Dow Jones index, the algorithm chooses which sentiment is the most appropriate for the specific moment. In each film frame, the system calculates an average sentiment of the 6 main emotions of the tweets included in that frame and visualizes these values on the film edge.

Finally, the future is composed of parallel timelines interacting together in different capacities  according to the predicted trust value and its evolution into the future. The potential trends are the result of a predictive analysis carried out through a recurrent neural network trained on the basis of the historical series of financial data and confidence index as we started investigating in Treu. risalgono a Treu.

During the entirety of the installation, the software analyzes the combination of financial data in relation to the index of confidence, thereby generating infinite possible evolutions of the installation in the future. The audiovisual content is always connected to this live data stream and it depicts abstract generative scenery. In this part of the show we were able to extract 3d models from bidimensional aerial images, populate the generated mesh with points and then feed the newly created pointcloud in our custom designed software for the whole animation process to begin.

TRUST [Atlas]
In the Mezzanine West the visitor is able to experience and visualize the core process that guides the entire group of installations: the continuous generation of possible futures by a recurrent neural network (RNN) that cyclically draws infinite possible evolutions of the trust index for the next 100 years. Together with showing the incessant human attempt to predict the future, the installation allows the visitor to visualize how the trend of trust in the past is intertwined with the tendency of a series of financial, social, and environmental indexes. Displaying the indexes together with the main events of the last 100 years, different correlations emerge between the historical series, the major historical transformations, and the perception of trust. 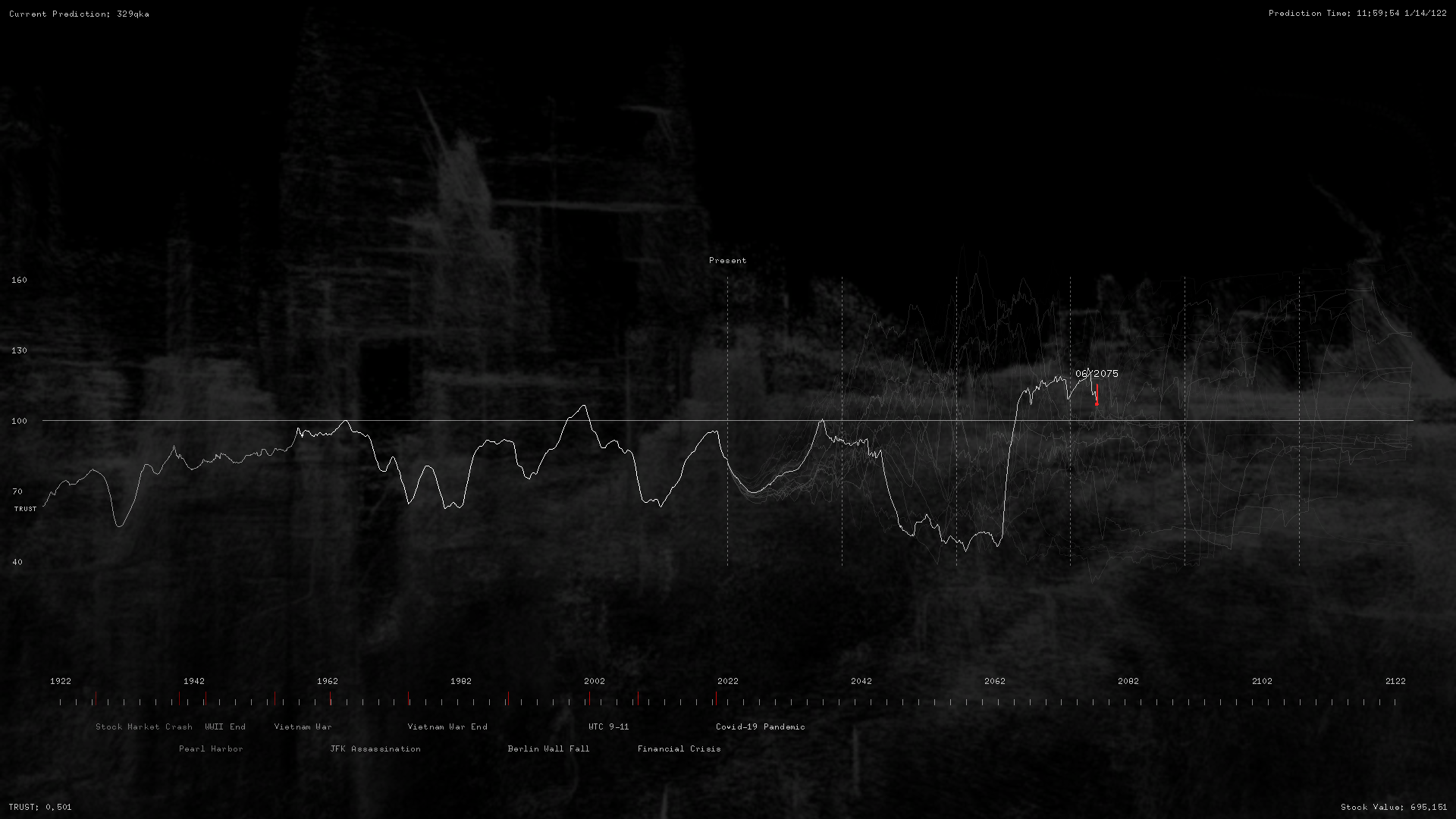 Recurrent neural networks are a special kind of network that includes neurons connected together in a loop that allows previous outputs to be used as inputs. They are extremely useful for processing time series, in which data are analyzed sequentially. In this specific case, we used a variation of RNNs called LSTM (Long Short Term Memory), an architecture developed to overcome problems encountered during the training phase of standard RNNs, which cannot retain a ‘memory’ of data.
In order to better develop a predictive analysis of the ICS (a value recorded on monthly frequency) we attempted to relate the ICS with other economic parameters; in particular, the Dow Jones index. We then trained an LSTM to predict the value of the Dow Jones and then reconciled that predicted value with the corresponding ICS index. Potential confidence ‘scenarios’ are then inferred from the algorithm’s predictions by reading the historical database and influenced from the real-time updated data through the value of the Dow Jones.

TRUST [Futures Archives]
This audiovisual installation is an exploration of the possible futures unceasingly generated by the main prediction algorithm. The Mezzanine gallery serves as an archive where each imagined future is paired with a video and displayed together with the relative trust prediction.
By analyzing the last trust prediction made by the RNN, each of the six monitors displays a collection of futures, sorted according to their similarity with the predicted one. 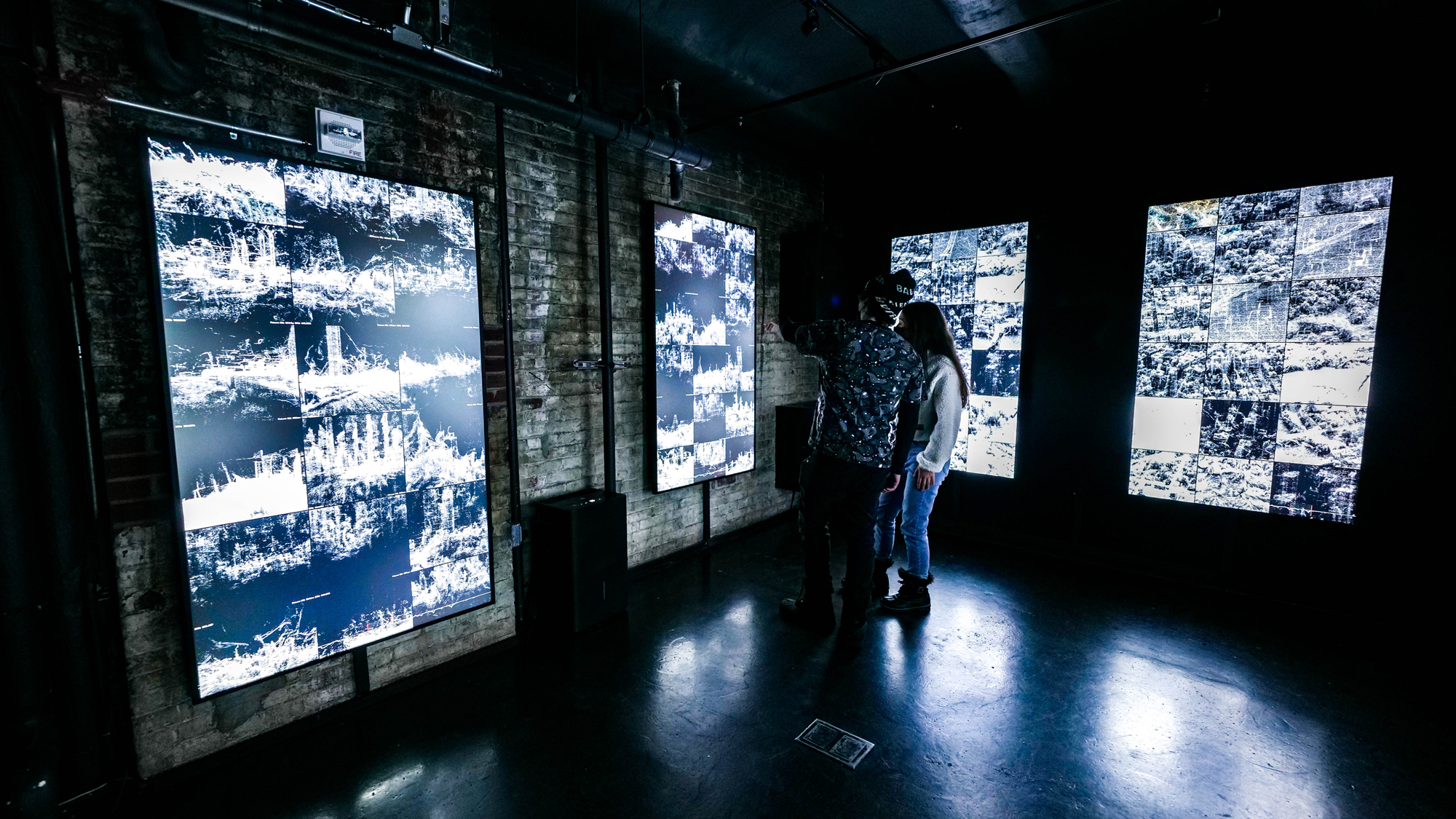 TRUST [Fragments]
This real-time installation represents collective trust by fragmenting it into small, individual trust-based interactions that occur at any given time. Data is drawn from transactions occurring on Bitcoin's blockchain and from the sentiment analysis of messages shared on twitter in real time, divided by positive and negative connotation. These data are aggregated to depict the state of trust of the immediate present. In [Fragments], fuse* reflects  on the revealing nature of the behavior of the world-wide community.

AUDIO
The sound component of Trust was developed following the three main parts of the main installation (Past, Present, Future) unveiling the trend of trust through a musical narrative. The whole structure and architecture of the composition are built on a ternary structure (A-B-A). Within these macro sections, we find smaller parts that develop and follow each other in strong connection with the visuals. We used polytonality and accumulation for the past, to recreate the positive and negative trend of trust with simple sound cells that stratify over time increasing their complexity and density; for the Present we explored the theme of the regularity and chaoticity of events through rhythmic compositions and polyrhythms. Finally, for the Future, all the elements presented in the previous sections alternate losing their structure, recreating an ambiguous landscape in continuous degradation. 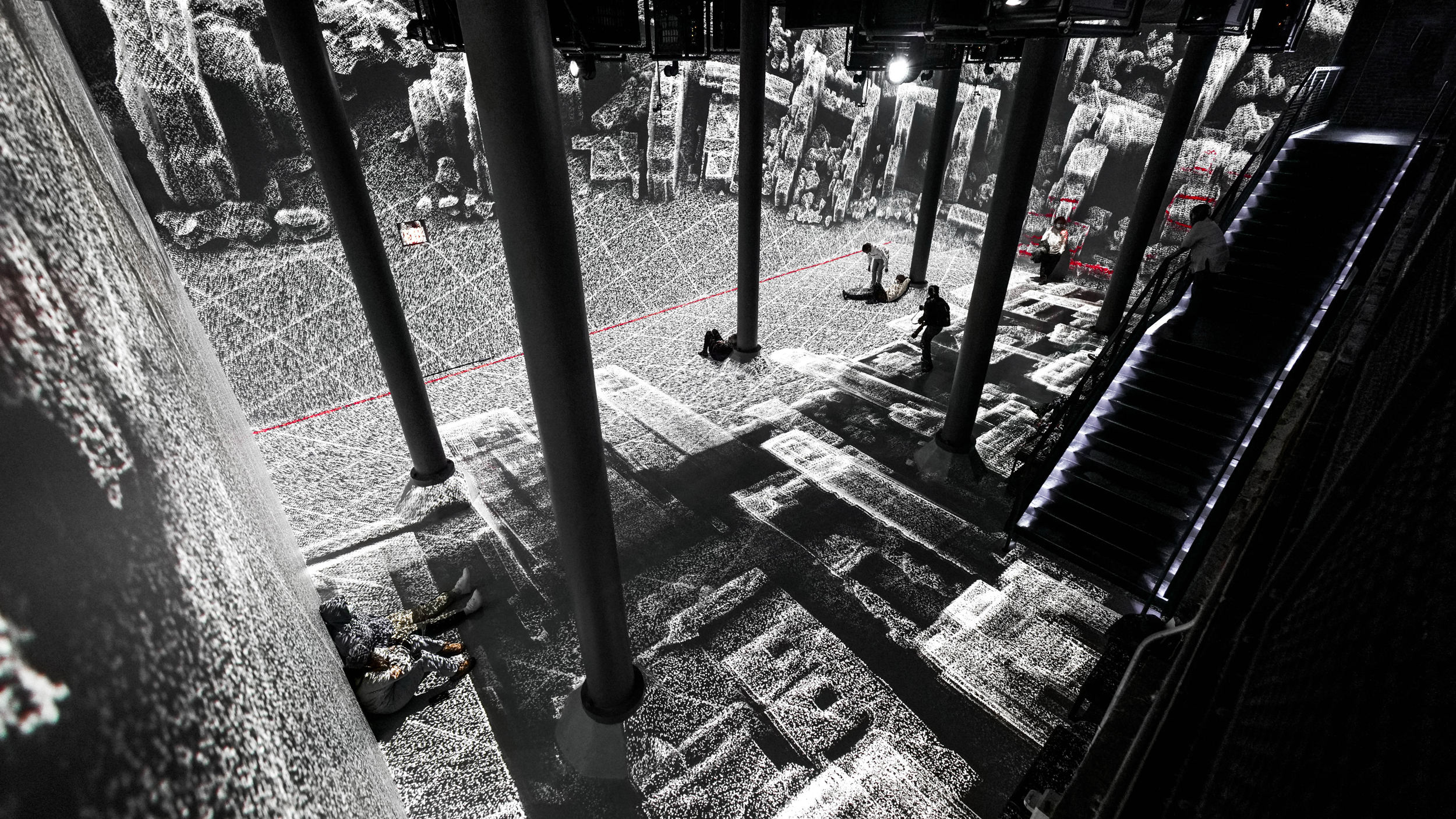 The timbral material of the entire composition was created through a first phase of experimentation by recording acoustic sources, percussion, guitars, electric basses and a second phase of manipulation of all the recorded material through different audio synthesis techniques, recreating the various timbral elements of the whole composition.

Top
next: VAN GOGH IN ME